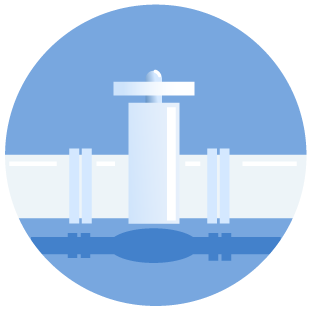 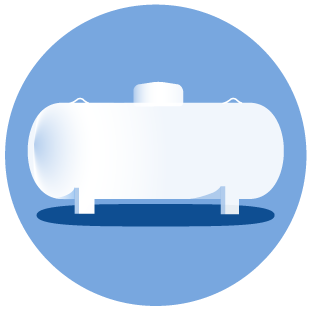 Jurisdiction over oil and gas waste containing naturally occurring radioactive materials (NORM) is split between the Texas Department of State Health Services (DSHS) and the Railroad Commission.  The DSHS regulates the possession, use, transfer, transport, and storage of NORM and the Railroad Commission regulates the activities associated with disposal of oil and gas NORM waste.

There are currently no RRC-permitted commercial landfills or disposal pits authorized to dispose of NORM waste.

Commercial injection/disposal wells permitted to dispose of NORM can be found using the Injection & Disposal Query on our webpage. To search for a permitted NORM disposal facility:

NORM in the Oil and Gas Field

NORM encountered in oil and gas exploration, development and production operations originates in subsurface formations, which may contain radioactive materials such as uranium and thorium and their daughter products, Radium 226 and Radium 228. NORM can be brought to the surface in the formation water that is produced in conjunction with oil and gas. NORM in these produced waters typically consists of the radionuclides, Radium 226 and 228. In addition, Radon gas, a radium daughter, may be found in produced natural gas.

Because the levels are typically low, NORM in produced waters and natural gas is not a problem in Texas unless it becomes concentrated. Through temperature and pressure changes that occur during oil and gas production operations, Radium 226 and 228 found in produced waters may co-precipitate with barium sulfate scale in well tubulars and surface equipment. Concentrations of Radium 226 and 228 may also occur in sludge that accumulates in oilfield pits and tanks. These solids become sources of oil and gas NORM waste. In gas processing activities, NORM generally occurs as radon gas in the natural gas stream. Radon decays to Lead-210, then to Bismuth-210, Polonium-210, and finally to stable Lead-206. Radon decay elements occur as a film on the inner surface of inlet lines, treating units, pumps, and valves principally associated with propylene, ethane, and propane processing streams.

Workers that conduct activities such as cutting and reaming oilfield pipe, removing solids from tanks and pits, and refurbishing gas processing equipment may be exposed to particles containing levels of alpha-emitting radionuclides that could pose health risks if inhaled or ingested.

Health risks from exposure to low levels of NORM are low. However, NORM-containing or NORM-contaminated materials may increase exposure levels to workers and other individuals to levels of concern. Human activities such as petroleum refining, natural gas extraction, water treatment, and mining can alter the natural background radiation.

Railroad Commission Regulations for Disposal of Oil and Gas NORM

The Commission regulates the disposal of oil and gas NORM under Environmental Protection, Subchapter F, Oil and Gas NORM. Subchapter F establishes the requirements for oil and gas NORM waste disposal. Oil and gas NORM waste is defined as any solid, liquid, or gaseous material or combination of materials (excluding source material, special nuclear material, and by-product material) that spontaneously emits radiation in its natural physical state, is discarded or unwanted, constitutes, is contained in, or has contaminated oil and gas waste, and exceeds the exemption criteria specified in 25 Texas Administrative Code §289.259(d)(1)(B) and (d)(2) prior to treatment or processing that reduces the radioactivity concentration.

Anyone who owns or operates equipment used for production or disposal (including waste storage tanks) must identify NORM-contaminated equipment with the letters "NORM" by securely attaching a clearly visible waterproof tag or marking with a legible waterproof paint or ink. Employers whose employees speak languages other than English may add to the tag the translation of the acronym "NORM" in those languages as long as the acronym "NORM" is also on the tag.

Facilities with oil and gas surface waste disposal permits that require financial security are required to conduct a NORM screening survey of the facility when submitting a closure cost estimate (CCE) for permit renewal. If NORM is detected at the facility above the screening level, the CCE must include additional costs for disposal of NORM-contaminated equipment, soils, or waste. For guidance on conducting a NORM screening survey, see our Closure Cost Estimate Guidance.

The activities excluded from Subchapter F are activities that are regulated by the Texas Department of State Health Services (DSHS). These excluded activities include:

The disposal activities exempt from Subchapter F include:

The disposal activities prohibited by Subchapter F include:

NORM-contaminated solids, such as pipe scale, may be disposed of without a permit on the site where they were generated:

Subchapter F also authorizes disposal of oil and gas NORM waste at licensed facilities. NORM waste may be disposed of by injection if it is treated by a DSHS specific licensee following specific requirements contained in the rule.

The Texas Department of State Health Services (DSHS) regulates radiation protection standards for the possession, use, transfer, transport, and/or storage of NORM or the recycling of NORM-contaminated materials under 25 TAC §289.259.

Any person who possesses NORM above the exemption levels is a general licensee under the DSHS regulations. Operators have a duty to determine whether they possess NORM above the exemption levels. The DSHS regulations require a specific license to perform decontamination work.
The DSHS NORM regulations contain special worker protection requirements for oilfield workers. These requirements generally address worker hygiene and vessel entry.


Survey of NORM at Texas Leases and Facilities

In 1999-2000, RRC Staff performed field surveys to measure levels of NORM in equipment at production leases and associated oilfield facilities. The results of the survey are summarized in a table format at this link: NORM Field Measurements.

Of the 612 sites surveyed, only 59 sites had equipment with readings above 50 µR/hr, the limit above which the equipment cannot be released for unrestricted use (use for purposes other than oil and gas activities.). Out of over 5900 readings, only 203 readings were above 50 µR/hr. Specific geographic areas tend to have elevated NORM levels.